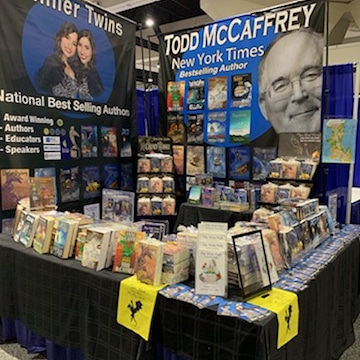 It’s me! I’m sorry if this wasn’t apparent but toddwriter.com is one of the many websites of Todd J. McCaffrey.

This is my more outspoken website, where I talk about life, the universe, science, and science fiction.

Generally, you’ll find me more on my own “normal” website, toddmccaffrey.org. You can also get there through pernhome.com.

Of course, I’m also one third of McCaffrey-Winner which keeps a site at mccaffreywinner.com.

Have you read the Third Pass books?

Here’s a reading list, if you want to learn more. http://books2read.com/rl/third-pass

One of the things I learned at the Business Master Class was the existence of Books2Read.com which is a really cool system to allow people to find and get eBooks from their preferred provider (Amazon, Apple, Kobo, Nook, etc.).

Of course, I immediately built some reading lists.

I was privileged to attend Dean Wesley Smith’s and Kristine Kathryn Rusch’s amazing Business Master Class which, if you’re a full-time writer, is chock-a-block (does anyone still say that?) full of amazing information on the actual business side of being a writer.

I am still digesting and processing the 5 days’ worth of information that I heard. The other attendees were all amazing. Quite a lot of smarts and brainpower in one room!

I’ve been trying to find this quote for some time now and finally have located it.  It’s from the Prologue of William Rosen’s The Most Powerful Idea in the World (Random House, 2010):

“Once humanity was tethered to the ground where its food grew, settled societies developed; and in them, hierarchies. The weakest members of those hierarchies depended upon the goodwill of the strongest, who learned to operate the world’s longest-lasting protection racket.”

I’ve just started on John R. Pierce’s old but marvelous book An Introduction to Informaton Theory which appears to be written for the semi-layman.

Interestingly, to introduce the notions of theorems and proofs, he introduces a game called Hex.  The board, obviousy, is composed of hexagons.  At the left and right are black boundaries and at top and bottom are white boundaries.   The object of the game is for either player Black or player White to complete a line of hexes joining the one boundary to the other.  He then goes on to prove that the first player to move will always win.

Okay, so what if, in interstellar contact, the first player to move will always lose?

That is, that the cost of making that first contact will make it so that the first mover will always “lose” in the long-term and, therefore, the best move is to wait for someone else to make first contact?

Prior to the industrial revolution the graph of population over time was a slowly rising sawtooth function which levelled out at about 500 million souls.

The Reverend Malthus argued that population would always expand to exceed its food supply and die off in the inevitable famine.

The argument is that this was avoided by the Industrial Revolution and the several Green Revolutions which occured before and after it.

Another possibility is that we are in a “Malthusian Bubble” where, because of our Green Revolutions, we have managed to expand population beyond the norm but, like all bubbles, this will burst –  with catastrohpic results.  Sooner or later, with unchecked population growth, even given more Green Revolutions, our population will outstrip our food supply.

Could we avoid this?  Yes.  There are a number of ways:

1. Reduce population.  Current estimates are that world population will peak and slowly decline.  The question is whether it will occur before we reach our food supply limits.

2. Expand our food supply base.  This can be achieved in a number of ways and some are being explored:

This last notion is only being bandied about as a thought experiment and is a good 50 years in the future.  It is possibly the most viable long-term solution, however.

In the meantime we must hope that either further Green Revolutions continue to supply our need for a cornucopia –  or face the consequences.

The Hendricks’ propose these questions to couples to rebuild their relationships but I think they are applicable in pretty much all interactions.

Question 4, What am I getting out of staying stuck? is a very powerful question. Most people don’t want to accept that they are stuck, let alone examine the reasons they are allowing themselves to stay stuck.

And, as they say, “The power of a question lies not so much in the answer but in the state of consciousness that it opens up.”

I’ve invented a new word: peopleology.  I did it because I wanted to combine sociology and psychology in an unprejudiced way.

The other words that would have worked perfectly is politics but we’ve sullied that word with the connotation of government and it still doesn’t quite fit.

So, peopleology: the study of people both singly and collectively.

When I was first in college, back in 1974, the world’s population was 3.6 billion and already considered dangerously large.  At that time there was a growing concern over the limits to growth, pollution, and sustainability.

Today, in 2014 (forty years later), the population is over 7 billion and generally conceded to be dangerously large.

And still, today, there is no one willing to talk about controlling the population.

The best we get is the “educate the women” dialog which notes that educated women tend to have fewer children. It’s also coupled with the notion that lowering infant mortality will ultimately cause populations to have fewer children.  All this, of course, is mankind’s way of closing its collective eyes and pretending there is no problem even though it’s been over two hundred years since the Reverend Malthus penned his An Essay of the Principle of Population.

Malthus predicted that because agriculture grew linearly and population grew exponentially, there must ultimately come a point when the population outgrew its food supply and died off through starvation.  Fifty years after he wrote his essay (1798) the Irish lost over half their population to the Great Famine (1845–1852) in a very poignant and tragic example of what happens when a population’s food supply vanishes.

Yet, instead of discussing this problem, the world persists in ignoring it. Only the Chinese, with their harsh restrictions on population, have had the courage to tackle the problem to any degree (and notice how their economy is well on the way to out-performing the rest of the world).

Here we are dealing with global warming –  a direct result of exploding population –  which is affecting our agriculture worldwide and we still refuse to see the writing on the wall.

Once again (or, perhaps, still) we refuse to look at population as an issue to be discussed and dealt with (as the Chinese have).  Once again, instead, we are waiting on nature to take its course.